Back to the (USSR) Future 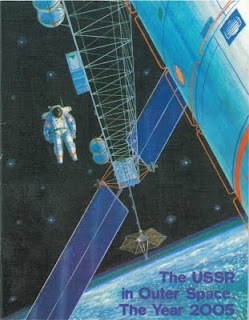 I found a small booklet nestled between a couple of volumes of my old Berkeley Physics Series texts in my office. I didn't remember it at first, and the title puzzled me - "The USSR in Outer Space: The Year 2005." Wasn't the USSR long gone in 2005?  The booklet has a Boston Museum of Science price sticker on it ($3.95), and that triggered a vague memory of a special exhibit on the Soviet space program - but when was that? A few Google searches revealed the answer: summer 1990 (I must have pictures somewhere). And the USSR officially ended December 25, 1991. But what's with the 2005?

Turns out the booklet is an optimistic look ahead at where the Soviets planned to be in space in 2005, apparently written in 1988 (it talks about a number of near future plans for 1989 and 1991-92, and mentions the "new" Mir space station, whose first module had launched in early 1986 and which had been occupied at least part-time since 1987 - it would be expanded in fall 1989 and continuously occupied until 2001).

There were big plans beyond space stations. The book describes a wide range of planetary probes, Earth orbiting resource monitoring satellites, as well as communication and navigation satellites. Orbital fabrication research too. There are some photos of the the shuttle lookalike Buran vehicle (landing after an unmanned test flight).

Some of this has come to pass, eventually including the International Space Station. But the estimate of a manned landing on Mars around 2005-2010 was unfortunately a bit too optimistic.
Posted by FlyingSinger at 5:08 PM

An interesting article has been posted by the author. Thank you for providing this information. Best wishes for your future posts and endeavors. buying YouTube Views