I'm still trying to get caught up with various stuff since my Japan trip and also trying to get in the right creative frame of mind to finish my album project. Not much progress on that this weekend, but at least I played some guitar (and listened to a lot of music, some of it classical as I ripped a bunch of my classical CD's now that I have a 32 GB iPod Touch with room for lots more music - I forgot how much I like some of Haydn's late symphonies). 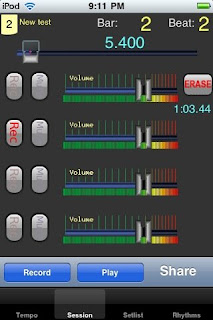 I also fooled around with some test recordings - on the iPod Touch! I knew there were some multi-track recording apps for the iPhone and iPod Touch, but I never looked into it. This weekend I stumbled on something called GigBaby! which is a 4-track recording app for just 99 cents (there's a free version too - I tried it for a few minutes before making the big spending decision). It's rather bare-bones compared to Sonar on the PC (of course!), but it's pretty cool. It has a bunch of pre-defined rhythm tracks you can choose in various styles (though none of them has much of a groove going one). It lets you set the tempo and then record up to four overdubbed audio tracks via an external microphone (the iPhone can also use the built-in mic). The sound quality is reasonably good, and there is a WiFi sharing capability that lets you move tracks between iPhones/iPods and back them up onto a PC or Mac. No stereo panning, no reverb or other effects, but for getting down a simple song, harmony, or instrumental idea, it's quite good. And it's all happening on a device I have in my pocket anyway. Nice!

Their web site doesn't look like much, but they have a decent little PDF manual. This Apple pocket computer never ceases to amaze me.
Posted by FlyingSinger at 9:33 PM