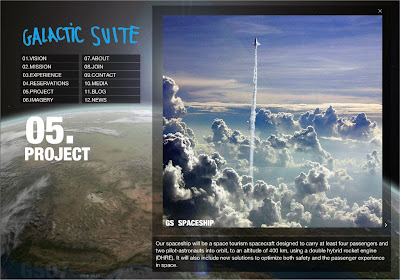 I guess I'm really slipping when it comes to keeping up with private space. Before seeing this Reuters item the other day, I had never heard of the Galactic Suite Space Resort project. Based in Spain, this company says they are on track to welcome their first orbital guests in 2012, by which time they will have apparently built a a tropical island training center and launch site, a modular space station, and an orbital rocket plane to carry four pax and two crew from the island to the resort. By 2012? It's not even clear that Virgin Galactic will be flying suborbital passengers by 2012, and they've been working on it for a while. Dudes, it's almost 2010!

Maybe they are actually in league with Bigelow Aerospace (which also mentioned 2012 for a space station, back in 2007).  Their announced price of $4.5 million for three days at the orbital resort compares very well with ~$30 million for a Soyuz ride to the ISS, but wait a minute.  I just watched a video that said they will use Russian flights until their space plane is ready, though Soyuz can only carry one passenger now, maybe two on an upgraded single-pilot version. Doesn't really add up, does it?  I'm very skeptical, even though Galactic Suite claims to have an ace in the hole in the form of an anonymous billionaire space enthusiast who has granted $3 billion to finance the project. I wonder if his name is Dr. Evil?

They have a few cool graphics on their web site, but not a whole lot of information. That pretty much seems to sum it up.
Posted by FlyingSinger at 9:51 PM