How to Fly a Plane 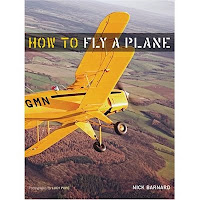 This was another distraction, but a nice one. I saw the original British edition of Nick Barnard's book How to Fly a Plane in an airline lounge on my whirlwind Europe tour last month (I think it was the S.A.S. lounge in Oslo). I took a quick look and noted the title for later research. I found a cheap used copy on Amazon so I ordered it. I finally read it tonight over dinner.

It's pretty cool and something of a nostalgia trip for me since I've flown very little since getting my license in 2001, sad but true. I keep thinking I'll get back to it but the time and expense make it tough to do it regularly enough to be safe. This book is not intended as a flight instruction aid, but more as a fairly detailed account of what's involved in flying, and what the various experiences feel like. The basic stuff is pretty accurate as far as it goes, and it's interesting in that they use a very modern, glass cockpit Diamond Star TA40 TDI as the basic training aircraft (a far cry from the tired old Cessna 152's I trained in).

But I especially liked the "first flights" section which describe what it's like to fly a modern high-performance glider (I've done a bit of that), a classic open-cockpit German biplane (a Jungmann, similar to the Boeing Stearman which I've flown a couple of times), a Sukhoi 29 aerobatic trainer (I wish!), a P-51 (I wish more!), and a British Hawk jet trainer (sigh).  So it's a combination of nostalgia and envy when you come right down to it. Of course I have "flown" aircraft like these in various flight sims over the years, but Barnard focuses more on the sights, sounds, and physical actions in the cockpit, for which sims are not very good (you can't simulate the classic smell of hot engine oil in the cockpit of a Piper Cub on a summer day when you're flying with the door open). He's an aerobatic pilot (in Britain) and it sounds like he's really flown most of these aircraft (though I'm not too sure about the Airbus A380).
Posted by FlyingSinger at 10:38 PM