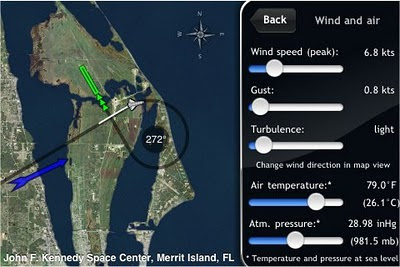 The title is correct, iPod shuttle, not shuffle. I just bought what is perhaps the coolest iPhone/iPod Touch app yet, F-SIM Space Shuttle, an excellent Space Shuttle landing simulator. You fly it by tilting and rotating the whole device - the accelerometers are sensitive enough to control it with great precision. The question is, is the player sensitive enough to control it with the needed precision? So far the answer for me is "not quite," but after a couple of dozen final approach flights, I'm starting to make hard landings instead of crash landings. Still a ways to go for safe or perfect landings, but there is hope for my not-as-young-as-they-used-to-be reflexes and learning curve. Then I can take on flying the full approach in the HAC (heading alignment cone) from 20 to 50 thousand feet above Kennedy or Edwards. This little sim features what seems to be a pretty nice flight model and it offers day and night landings, clouds, and wind to keep things interesting. Since a shuttle final approach lasts something like 2 minutes, you can crash (I mean land) a lot of times in a half hour session of goofing off (a full approach is about 5 minutes). 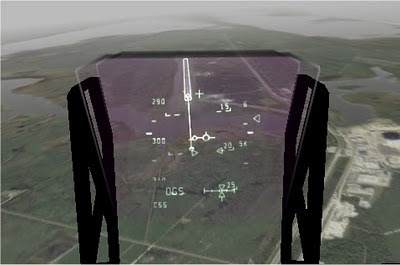 The sim currently lacks external views and a replay function, but the developer is working on these. Not bad for $1.99 - that's right, a flight sim for two bucks! Of course it's a very limited domain (only the last few minutes of atmospheric flight, unlike Orbiter which simulates many phases of shuttle operations, from launch to docking to re-entry and landing). But Orbiter doesn't fit in my pocket like the iPod Touch (and Orbiter doesn't score your landing quality the way this sim does - part of the game-like quality that makes it quite addictive if you are into flying stuff). It has great audio (recorded from actual shuttle flights), though the script does get a little repetitive. There is a virtual cockpit mode, but I prefer the fixed front view - there's enough moving around without moving your eye position too. 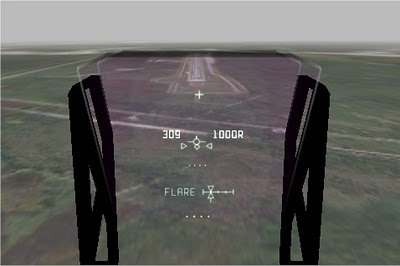 As with real flight and real landings (which I sadly have not performed very recently), one key seems to be making very small adjustments and corrections sooner rather than big ones later. Unlike most landing situations, there's no engine and no opportunity for a go-around or even a flight path adjustment with power.But the HUD gives you a lot of visual cues, and if you have a light touch on the accelerometers, you can keep everything happy and get the shuttle on the runway in one piece most of the time.

UPDATE: I just saw screen shots of the iPad version of this app. Really amazing visuals. Could this be the reason to get an iPad? Probably not. At least not until the second generation iPad comes out. The main advantage of the iPod Touch is that it is pocket size so my Kindle books, New York Times, music, video, WiFi apps, and now space shuttle sim are always available.
Posted by FlyingSinger at 11:45 PM