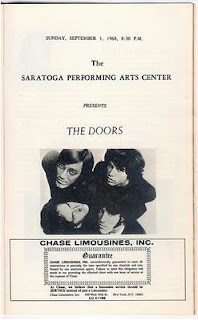 I just happened to read that departing Florida Governor Charlie Crist has pardoned the late, great Jim Morrison for his 1970 conviction on charges of indecent exposure and profanity. Whether or not Jim actually exposed himself on stage at a March 1969 Miami Doors concert, this posthumous pardon will really not do much for his overall image as a drug- and alcohol-crazed wild child. But it did prompt me to check on something and to correct my personal historical and concert record.

I have always told a story of how I had cleverly convinced my mother to take a friend and me to a Doors concert at Saratoga Performing Arts Center (SPAC) in the summer of 1968 or 1969, when I was in high school. The setup was that she had taken the family to see Peter, Paul, & Mary at SPAC the previous summer, and wasn't that a great time? OK, so the Doors are a little different kind of music, but it will still be fun. And somehow I missed mentioning the bit on Jim being arrested in Miami for lewd behavior on stage. She agreed, and we went to the concert. It was the loudest thing I had ever heard (though still great, I thought), and many people were smoking as well as sitting on the grass all around us. My mother was really pissed. No more concerts for me!

It turns out the concert we attended was September 1, 1968 (I was 15 at the time), and the infamous Miami bust had not happened yet. I should have realized this because in the summer of 1969 I was at a six-week NSF Science Student Training Program at Ohio University, where I watched with a bunch of fellow high school science nerds from all over America as Neil and Buzz cavorted on the moon . That was great. But it was not the Doors summer. In August of that year I had a crappy summer job washing dishes at a Howard Johnson in Lake George, NY (talk about coming down to Earth). Two of my co-workers offered me a ride to a weekend concert in Bethel, NY that would later be known as Woodstock. But I knew my parents would never go for that after the Doors experience, and besides I needed to earn money to buy some hippy clothes for my upcoming senior year. So I passed on that one. Oh well.
Posted by FlyingSinger at 10:46 PM