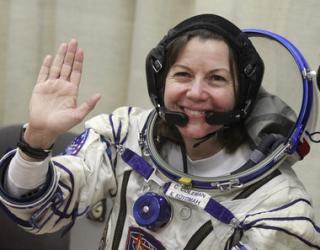 In March 2009, I exhibited at the annual Space Expo held at the New England Air Museum at Bradley Airport, Connecticut. As I often have done, I used Orbiter to demonstrate some aspects of space flight, with a second computer set up with a joy stick to allow attendees (mostly kids) to have a try at landing a simulated space shuttle from final approach. This is a good hands-on demo because it only requires two controls (the joystick and the G key, to drop the gear). But it's harder than it looks.

Unfortunately, this demo was so popular, that I only managed to catch about 5 minutes of a talk by the Space Expo's special guest, astronaut Cady Coleman. But fortunately, Col. Coleman was kind enough to take a some time at the end of the day to visit with some of the exhibitors, including me. We chatted for a few minutes, and I told her about Orbiter in hopes that she would take some interest in this for educational purposes (or perhaps share it with some colleagues at NASA). She was quite interested to see Orbiter (she said "why didn't I know about this?"), and she asked me to send her some information, which of course I did. I was pretty happy when she replied the next day to my email:


Bruce – it was a pleasure to meet you – and I look forward to being in touch.  I can’t wait to start playing – and am soooo thankful that a manual exists….  I’m sure I’ll still have questions, knowing me!    My to-do list is a bit long these days – so I may not get to try it out right away - but this is really really neat stuff.  I’m assuming that you won’t mind if I share it with other folks in my office?  Thanks for taking the time to write – not to mention taking the time to come to the event.  I thought it was a great event – although I’ll tell you that I slept well on Sunday night…. I’m sure you did as well.  It is good work – but takes a lot out of you!  Thanks again -   Cady

...but I didn't expect to hear much more for a while, once I realized that she was already preparing for a late 2010 Soyuz flight to the ISS. On December 15, she launched on that flight, and she is now part of the Expedition 26 crew of the International Space Station (here are some of her thoughts just before she launched). I also learned today that she actually lives not far from me, in Western Massachusetts (when she's not in Houston, Russia, or space!). So it's not like Cady Coleman and I are best friends or anything, but it is pretty cool to have even this tiny connection to the ISS. Sometime after she gets back to Earth next May, I'll follow up on that email.

The video below features the ISS Expedition 26 Commander Scott Kelly of NASA and Flight Engineers Cady Coleman of NASA and Paolo Nespoli of the European Space Agency offering Christmas and New Year's greetings to all people on Earth on Dec. 21.

Posted by FlyingSinger at 6:22 PM