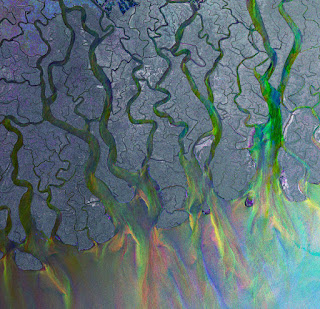 I mentioned the band Alt J the other day in a blog post about music I've bought recently. I can't stop listening to their album "An Awesome Wave" (whose cover graphic, above, is actually an Envisat image of the Ganges delta). BTW, the MP3 album is still just $2.99 on Amazon.

I'm trying to figure out what I like about this music. The vocals and lyrics are strange to say the least - hard to say what the songs are about, but there are a lot of vaguely sexual and violent references in them. I watched videos for three songs, Tessellate, Breezeblocks, and Fitzpleasure, and they too are strange and semi-violent. The songs don't sound especially complex musically . So what's the deal?

I think it's mostly about texture and space. The sounds of the guitars, vocals, percussion, and synthesizers are varied and colorful, and there are usually not a huge number of sounds at once, so these varying textures "stick out" in the mix, giving a minimalist yet rich feeling. There is also "space" in the songs where everything stops except the vocals, guitar, or percussion, and things get very quiet, and then loud. There also seems to be variation in tempo. I guess that all adds up to the element of surprise - even after multiple listenings, there are new things to notice. It just seems so fresh and bursting with little variations at every turn. It works for me - and for a lot of other people, it seems. I noticed that they are playing in Boston next weekend, but of course the two shows are sold out already. You snooze, you lose, but in fairness, I did just discover this band on February 15!

Posted by FlyingSinger at 1:35 PM