I was in California on business from January 26 to February 6. It was a pretty interesting trip which included a couple of weekends. I flew into Los Angeles where I rented a van for the annual international distributors' meeting (IDM) that I always help to host (and serve as a driver for the various events). Before driving to San Diego for the IDM kickoff events, I spent a few hours at the California Science Center in Los Angeles. This museum is now the home of the retired space shuttle Endeavour, which I last saw in person in 2007, when I visited Kennedy Space Center for the launch of STS-118. At that time I got to see a little bit of Endeavour on the pad during a pre-launch KSC tour (it was wrapped in the service structure so you couldn't see much). Then I got to see the launch, which of course was thrilling. 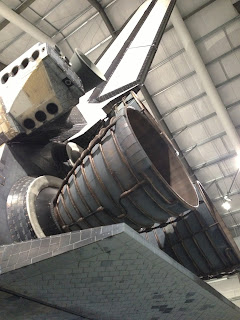 This time I got a lot closer to Endeavour, which is displayed horizontally in its temporary hangar (the plan is to construct a new display building where the shuttle will be displayed vertically in simulated launch position). Of course it is huge, airliner size, and it was really cool to see the thousands of re-entry worn tiles that protected its belly, as well as the enormous main engines, thrusters, etc. I completely understand that the shuttle program had to end - with its 40+ year old technology, it was a costly and risky way to launch cargo to orbit, but it was much more than that. It was also the only true space plane people have flown or likely will fly for a long time to come (not that capsules can't do the basic job of transporting people to orbit).  So it was bittersweet to see Endeavour on display as a museum piece. I've got some more Endeavour pictures and video clips on Flickr, along with a couple of shots of the Apollo-Soyuz command module, Gemini 11 capsule, and the A-12 Blackbird "spy plane" that is displayed near the parking garage outdoors. 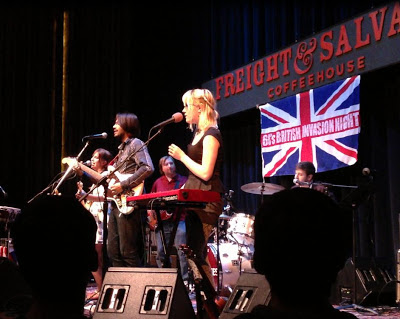 After the distributor meeting (which involves a lot of people, PowerPoint slides, and food), I flew up to San Francisco for the Photonics West conference. On the weekend, I got to spend some time with my wife's daughter, including a wonderful concert in Berkeley. It was a British Invasion tribute concert with a focus on Buddy Holly and his influence on the British bands of the 60's. Four local bands did cover versions of songs by such classic bands as the Yardbirds, along with Buddy Holly tunes, and a few originals. All four bands were great, but I especially liked Girl Named T, who performed with two different band line-ups. Their playing and harmonies were first-rate, and the few originals were intriguing, so I bought T's two CD's which were on sale at the merch table. An incredible find! Really great stuff! Check out her stuff at CD Baby or Amazon. I have also posted a 92 second YouTube clip of T and company doing a lovely version of John Lennon's "Because" - great harmonies! Check this out before YouTube's listening robot figures out it's a Beatles song and makes me take it down.
Posted by FlyingSinger at 6:46 PM

It always frightened me, I must say, to see those exhaust cones vibrating as they discharged the gases from the shuttle combustion chambers. The cones looked like they were ready to fall off. Little did I know there were weaker links. I can't think about the shuttle without thinking about the people who died -- which pretty much negates any romantic feeling about space travel, although I'm sure the pure scale of the display is impressive.

Maybe it is in one of your earlier blog posts but I'm wondering when/where your aerial fascination arose. I do remember the HP-programmable-calculator spacecraft landing programs you liked way back in 1976 or so, so it must be deep-rooted!

Aerial fascination, ah yes. I think it started with the Gemini space program launches, or maybe even Mercury which was 1961 to 1963, when I was about 10. I remember seeing those on TV, and looking at Life Magazine pictures. I read everything I could find about astronauts and I learned that they were test pilots to start with. Of course this meant that they started out as military jet pilots, so they could go to test pilot school. So that's what I decided I would do. I started writing to the Air Force Academy to get their catalog when I was around 10 or 11. I was heartbroken around age 12 when I needed glasses. Without 20/20 vision, I would not be eligible to be a military pilot. So I built dozens of model airplanes, borrowed Aviation Week magazines from the library, and dreamed about other ways to fly. I joined Civil Air Patrol around age 12; their cadet program was a kind of Air Force Boy Scouts. The magic part was free orientation flights in Piper Cubs in the summertime. This was the most thrilling thing I had ever done, although it scared the crap out of my mother. I did this for a couple of years, but these orientation flights didn't count as flight training, and I didn't have the money to take real flight lessons, even at reduced rates that I could get as a CAP cadet. I thought I would become an aerospace engineer, and take flight lessons while I was in college. But somehow I ended up at CMU instead, which had a lot of advantages in the long run. So I waited, went to college, worked on music,went to graduate school, got married, had kids, etc. My interests somehow moved to computer science and optics along the way. Finally between 1998 and 2001, I took flight lessons and got my pilots license. Long story why haven't flown more since then.

So flying and space have been a central theme in my life, and the main reason that I decided to go into technical education in the first place. I was at Ohio University in the summer of 1969, when Apollo 11 landed on the moon. I believe that my flying and computer interests helped me to get into this NSF summer program in the first place, despite the fact that I went to a very small rural school. I still love just about everything about airplanes and spaceflight. Just as I love just about everything about creating music. A lot of the rest of my life's been really great. I can't complain about how it turned out. But if I had had 20/20 vision in my youth, I'm confident that I would've somehow made my living flying airplanes. And tried to become an astronaut. Crazy but true!