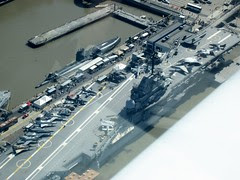 I've been busy with work and preparing for an astronomy/space school event this Friday, so not much blogging time. There's lots of space news you can read about elsewhere of course - more details on NASA's Moon plans, Mars Reconnaissance Orbiter's imaging of the two Vikings and the Spirit rover, and the impending launch of STS-116. Cool stuff. No time.

But here's a quick flight related story - the USS Intrepid briefly takes to the water (towed to a New Jersey drydock for refurbishing). Intrepid is normally docked at Pier 86 in New York City, where it houses an excellent air and space museum. I love aircraft carriers, airplanes, and aviation history, and I visited the Intrepid museum several years ago. Then last April (2005) I had the good fortune to go along on a weekend outing with the Worcester Pilots Association, flying the Hudson River VFR Corridor at an altitude of 900 feet above the river. We flew down on the New Jersey side (passing the Statue of Liberty), turned around over the bay, then flew up the Manhattan side, passing close to the Intrepid. I interrupted looking for traffic and talking on the radio to take a few pictures, including the one shown here. I posted a couple of others on Flickr.
Posted by FlyingSinger at 9:10 AM