The Future Is Creeping Up On Us


Recently the New York Times has been running a special series of articles called "Smarter Than You Think" (a series examining the recent advances in artificial intelligence and robotics and their potential impact on society). Machines are starting to take some real giant steps. I've always been interested in AI and even considered making a career change in the mid-eighties when "expert systems" were making a splash. Fortunately I stayed with optics, because AI per se never became an industry or a field of its own outside of research labs. Which is not to say that there hasn't been progress in AI - just that people kept moving the bar. Things that used to be considered nearly impossible for machines (like speech recognition) were developed and folded into software engineering. In other words, if machines are doing it, it ain't intelligent. AI stays just over the horizon.

So beating grand masters at chess? That's been done by an IBM supercomputer with a lot of special programming and coaching. So it's not AI, just brute force. But what if a few of those IBM supercomputers got together and started to compete with humans on the game show Jeopardy, with its wide-ranging subject matter and tricky word-play clues? That would be impressive, right? Well, according to the first article in the series, it's still more or less brute force, though when the software is playing Jeopardy in real time, with no internet connection (but with a huge local database of "general knowledge") and often beating human champions of the show, that seems pretty smart to me no matter what sort of statistical inferencing, data mining, or number crunching is going on behind the scenes (things are pretty messy up in our own "wetware" too). There may be a televised human vs. AI Jeopardy tournament later this year.

Of course Jeopardy is still pretty narrow, and the bar keeps moving. Speech recognition is good enough for many customer service tasks now, but still nowhere near humans in flexibility and generality. But it's getting better, even if "Bina48" comes across as something of a whack job in her (its?) interview. There are robots designed be cuddly and emotionally supportive (they look like baby seals). There are robots who are learning to be teachers. It's all pretty mind-boggling even if you've read a lot of SF and future-looking non-fiction.

There's also ASIMO, Honda's experimental humanoid robot, shown in the video above. A cute little robot kid who can walk, climb stairs, and even run (I saw a demonstration at Disneyland back in February - really impressive, especially the stairs). Honda has been working on this bipedal robot assistant for some 20 years and it's not ready for the general home quite yet - but it's getting closer. I'm really more optimistic than creeped out by the growing robot population. I think they will ultimately lead to better lives for many humans, though as with any technology, they will also displace some humans' jobs along the way. We really need to work on that. 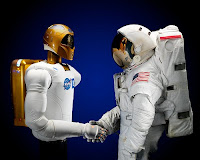 And I haven't even mentioned NASA's Robonaut who will soon be living on the ISS. More on that another time...
Posted by FlyingSinger at 11:29 PM