There are a number of great astronomy and space apps for the iPhone and iPod Touch, and I've discussed some of them here before. I just got a new one called Solar Walk - 3D Solar System (it's "3D" because it actually supports red/green 3D glasses for some images, though I didn't find this to be very exciting on the iPod Touch). Although it's easy to tool around the solar system in Orbiter (free space flight simulator for Windows), Solar Walk is available in my pocket and is better for certain "big picture" questions about the solar system.

Case in point: the recent prominent alignment of Venus, Mars, and Saturn in the early evening western sky. Here's a screen shot from Star Map on the iPod Touch showing their positions this evening around 19:40 local time: 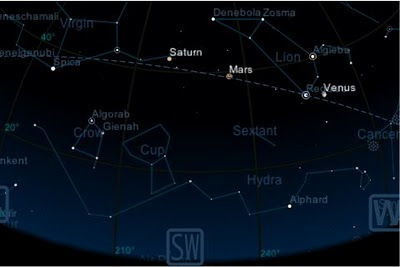 Why are they showing up that way? If you launch Solar Walk and touch the little orbital diagram icon, you can pull up an interactive "orrery" that shows the correct relative positions of the planets in their orbits for any given date and time. Here it is for this evening at about the same time as the above sky shot: 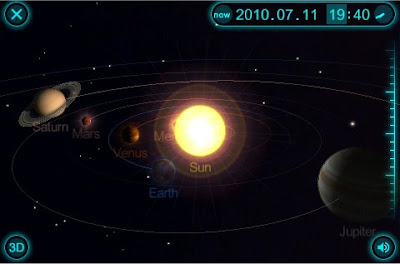 So you can see how this apparent alignment occurs from the positions of Venus, Mars, and Saturn in their orbits (of course the sizes of the planets and orbits in this diagram view are not correct - they need to be visible on the small display - but the angular positions are correct). Solar Walk also lets you zoom in on the planets and their moons - enough to see the main features of each planet, though not very close up. There is also a fair amount of information on each body and on the spacecraft that have visited it as in this screen about Saturn: 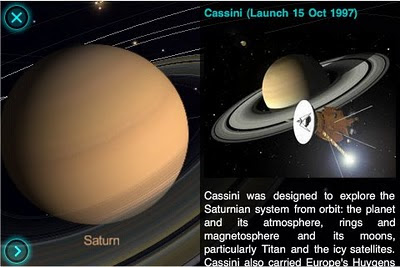 There's nothing right now on dwarf planets and asteroids, but what it has is really useful for understanding and explaining what is happening with the main members of our solar system.
Posted by FlyingSinger at 11:33 AM