After a reader posted a comment identifying the lake in an aerial photo of Switzerland that I had included in a blog post, I got curious about the details of what was in that picture, and where I was when I took it. Google Maps should make this easy, right? Well, yes, more or less. But I'm not the best photo-interpreter and it took me a while. It was fun though.

Because the lakes in the picture (Thuner See and Brienzer See) are much occluded by mountains, it took me a while to figure out where I was and what direction I was probably looking. The first breakthrough was when I noticed I had taken two shots very close together with the same zoom setting. This showed me a much bigger area including parts of both lakes. I stitched the two into the panorama shown above (the Flickr page will allow you to get the original size picture if your care) . The second helper was a small airfield I noticed in a valley near the end of one of the lakes. Switzerland doesn't have many airports, and with the help of Google, I identified it as "Meiringen Mil" (LSMM) apparently some sort of dispersed military airfield (embedded among farms, but the runway seems to be 6500 feet, small jet capable). It's near the city of Brienz at one end of Brienzer See so this pretty much solved it as far as placing myself and my field of view on Google maps (see below - also can be zoomed much higher on Flickr). It turns out I was looking toward the city of Interlaken which is between the lakes (get it?) though it is mostly hidden by a mountain in the foreground. The red line is my estimated flight path, and the yellow lines the estimated field of view for the above panorama. Mystery solved! 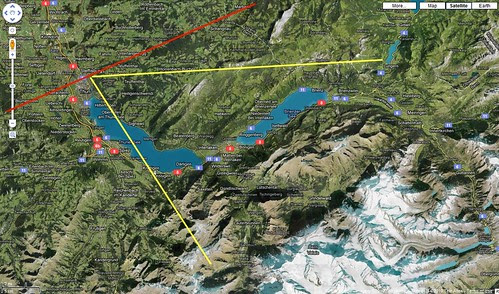 Posted by FlyingSinger at 9:29 PM