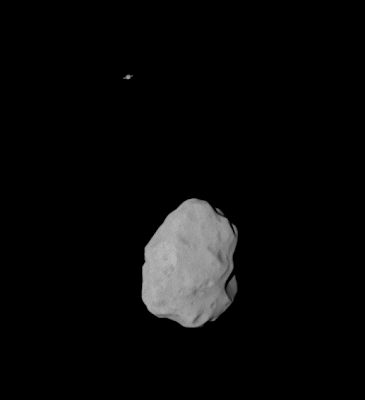 ESA's Rosetta spacecraft today made its closest approach to the asteroid 21 Lutetia and ESA has posted some high-res images but so far no captions. I think this one with Saturn in the distance is very cool. I played around a bit with a cool Rosetta add-on for Orbiter back in 2007 and 2008. The screen shot below shows an unrealistically close simulated pass (43 km!) of asteroid Steins which actually took place in 2008. Steins is located in the main asteroid belt between the orbits of Mars and Jupiter, as is Lutetia, but Lutetia is a much bigger asteroid, about 100 km in diameter, the largest one yet to be visited by a spacecraft. The Steins encounter took place during Rosetta’s first incursion into the main asteroid belt while on its way to visit Comet 67P/Churyumov-Gerasimenko. You could certainly say that Rosetta gets around. 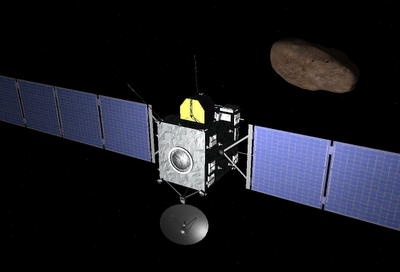 Posted by FlyingSinger at 5:46 PM