Several new Earth-like exoplanets were recently announced, based on continuing observations from NASA's Kepler satellite (the above graphic is from NASA's Kepler page). This brings the number of confirmed exoplanets to 882, according to one of my favorite iPad apps, the aptly named Exoplanet (also for iPhone). Kepler-62 is a five-planet system with planets of 1.4 and 1.6 Earth radii orbiting in the habitable zone, according to the discovery paper (abstract). Could these planets actually have liquid water? And life? Too soon to tell, but we will sure have plenty of candidates to look at once we have some tools with sharp enough vision and sensors, like the upcoming JWST (James Webb Space Telescope). Of course at 1200 light-years from Earth, no one is going to be visiting the Kepler-62 system anytime soon (barring great advances in wormhole transportation systems). 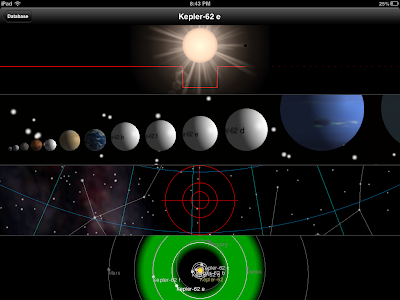 Of course you can find such information directly from Google, NASA, and other sources, but the Exoplanet app is pretty much one-stop shopping for keeping up with newly discovered planets and how they compare with one another, through a variety of cool graphics and comparison tools. For example, the page for Kepler-62e above includes the relative sizes (with Earth just to the left of Kepler-62b) and the location within the star's habitable zone (shown in green), along with other information (you can touch each band for a full-screen version). You can also view lovely, zoomable graphics of the Milky Way Galaxy, showing its structure along with the location of any selected exoplanet, plus our own Solar System, for reference (example below). 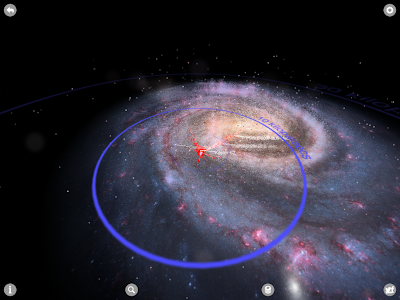 The screen below shows the latest discoveries at the top of a detailed database table. There is also some great background information that explains what exoplanets are, how they are discovered, and how they vary. The basic app is free, but there are various low-cost in-app purchases to add more features and to remove ads. Updates for newly discovered planets are small and frequent free downloads within the app (when you have an internet connection). A cool tool. 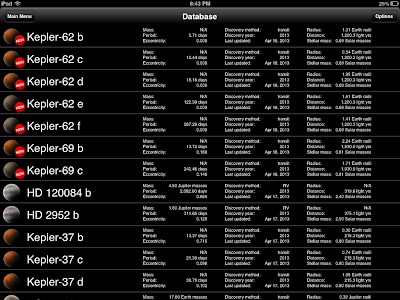 Posted by FlyingSinger at 9:41 PM