The ISS Song, "live" from the ISS 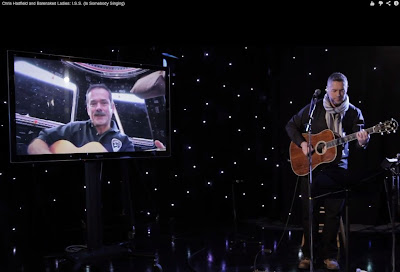 I know I said that Neil DeGrasse Tyson is my hero, but can I have more than one? Because now Canadian astronaut Chris Hadfield is also my hero. In addition to the great photos and videos sent down daily from the ISS by Col. Hadfield, he also wrote and recorded a song with Ed Robertson of the Barenaked Ladies. Cool enough, but how cool would it be to sing and play the song in space while Ed and friends join in from Earth? You can see for yourself in this video -- the song is called "I.S.S. (Is Somebody Singing)." Chris is also helping to promote Canada's Music Monday on May 6.

It is the International Space Station, so the fact that a Canadian astronaut is bringing so much attention to the ISS should not be a surprise. I just hope that NASA, ESA, and the other ISS partners continue the public outreach that Chris Hadfield is leading so effectively now.  He's really given it a human face and voice. Chris won't be the ISS commander forever (in fact, he's scheduled to come down on May 13).
Posted by FlyingSinger at 10:16 PM