Tyson is My Hero 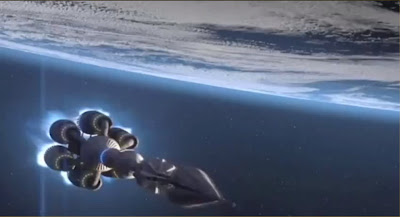 Neil DeGrasse Tyson is my hero. Astrophysicist, science educator, eloquent proponent for space exploration, writer, PBS television host. His book Space Chronicles: Facing the Final Frontier is one of about ten Kindle books I am actively reading on my iPad (it's a collection of previously published articles and essays on various space exploration topics). I've read interviews with him and watched a number of his videos, always impressed with his ability to communicate clearly and in a (yes) down-to-earth way on the issues of science, including space exploration and the role that it could play in building a better future for all of us, starting with the inspiration it could provide to the next generation of scientists and engineers.

Tyson is not the first to talk about the fact that Apollo was fundamentally a Cold War program, a technologically sophisticated battle with the Sputnik-launching, human-orbiting Soviets, which I have understood for years. NASA didn't receive as much as 4.4% of the federal budget in the 1960's [vs. around 0.5% now] with the goal of cracking the secrets of the universe or inspiring kids to study science and technology, but inspire it did. I'm one of those kids, even though I ended up an optical engineer rather than an astronaut or aeronautical engineer as I originally hoped I would be. Space has been and can continue to be a huge technology and education multiplier, and I hope that our leaders can come to see this in the next few years, even as private space begins to take over more of the routine aspects of spaceflight in low Earth orbit. Private space may get us to Mars someday, but NASA and other space agencies around the world really should be deeply involved with the vision and the parts that require big long-term investments.

If you want to learn more about the value of space exploration, you could read his Space Chronicles, or just search for Neil DeGrasse Tyson on YouTube or Google. He's a very engaging speaker and writer. This video, "Message to the Future" (apparently a speech from fall 2012) is a good place to start. He tells the story a lot better than I do.
Posted by FlyingSinger at 11:20 PM