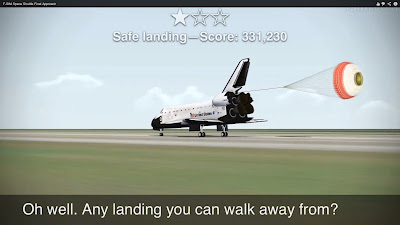 F-Sim Space Shuttle (iTunes, also available for Android devices) is the only gaming app that stays on my iPad and iPhone for very long. I don't play it all the time, but every once in a while it's nice to shoot a few space shuttle approaches just for the fun of it. The latest update (v2.8) just came out, and developer Sascha Ledinsky has added a really cool feature: the ability to export videos of your flights!

He added external views and in-app replay features long ago, but with video export, you can share your accomplishments with the world - in HD! So of course I had to try it. This YouTube video features a "safe" landing (not bad except for landing left of the runway center line), with a musical soundtrack added in iMovie (2 minutes of the song "Down & Out" from my recent album "Look at You," available on iTunes, not to mention Amazon.com).

UPDATE: A small tip has helped my landings immensely - pinch-zooming to enlarge the HUD display so the FPM (flight path marker) and "guidance diamond" are easier to view and position. I finally made a "perfect" final approach landing for 900,832 points, recorded in this video. Next stop: a perfect full-HAC approach and landing, and a million point landing. Then I will retire just like the real shuttle pilots. Unless I decide to pursue shuttle aerobatics, like this amazing barrel roll on short final, followed by a good landing (flown by Sascha, the developer of F-Sim Space Shuttle). Slick!
Posted by FlyingSinger at 3:42 AM