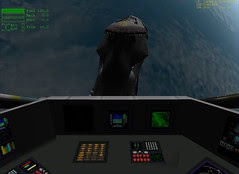 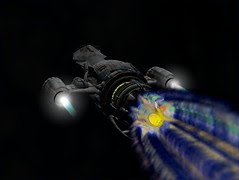 Inspired by the cargo ship "Serenity" as seen in the TV series "Firefly" and in the movie "Serenity," this is a greatly expanded and improved version of an earlier add-on. Jon Marcure and Shawn Beard have been developing this for several months, posting screen shots and progress reports in the Orbiter forum. So this would certainly qualify as a hotly anticipated add-on, and it is finally available on Orbit Hangar. The 3D modeling and special effects are really cool. It includes two deployable shuttle craft that are flyable add-on ships themselves, as well as a number of animated features such as the cargo bay, rotating engine pods, and the spectacular Firefly drive (startup phase of animation shown above). Both the Firefly and the shuttles include virtual cockpits (view from the shuttle is shown above), a pretty rare feature in Orbiter add-on ships. Nice work Jon and Shawn!
Posted by FlyingSinger at 11:22 AM