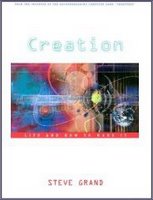 Steve Grand, that is. Steve Grand is the inventor of the artificial life computer game Creatures, and he describes his job as “digital god.” In 2000 he wrote a book called Creation: Life and How to Make It, relating his experiences and views on artificial life and many other things, and describing the work that went into the first Creatures game. With chapter titles such as “the importance of being emergent,” “God’s Lego set,” and “I am Ron’s brain,” you can perhaps see one of the things I really appreciate in Steve as god: his sense of humor. This is not to say that your more conventional supernatural gods such as Zeus don’t have a sense of humor as well – of course they do, and examples abound (e.g., Pat Robertson). But I find Steve’s self-effacing, witty, zany, and British brand of humor rather more amusing. He’s also much more transparent than your average god – he tells you what he’s trying to do, and why, and how. He works in interesting but not mysterious ways, thank god.

I found Creation on a bookstore bargain table and was really impressed by what Steve has accomplished and how he describes it. He’s rather down on the essentially failed traditional AI top-down approach of building isolated, specialized, and fragile programs to do things like play chess. His approach is bottom-up. Here’s a good summary from the book (chapter 8, page 119):

This is the way organisms work. There is no architect, and no master controller telling the system what to do. There are just vast numbers of small independent entities that respond to signals as and when it suits them, and emit new signals whose destination they do not know. Top-down control leads to complexity explosions, because something somewhere has to be in charge of the whole system, and how much this master controller needs to know increases exponentially with the number of components in the system. Living systems are bottom-up: no part knows or cares what its role is in the whole, but the whole still emerges from the cacophony of these zillions of mindless loops of cause and effect.

Steve does more than talk about this approach – the creatures in the Creatures game live by this approach and sport neural network brains that learn from their environment, immune systems, and their own genetic code. I just bought Creatures Exodus (essentially a repackaged Creatures 3), and though I doubt I will have time to explore it in much depth, I felt compelled to have a first-hand look at what can be done with this bottom-up approach. Because as Steve says in the book (page 8):

…if you’ll forgive the staggering lack of modesty this implies, Creatures was probably the closest thing there has been to a new form of life on this planet in four billion years.

I also bought his 2003 book, Growing Up With Lucy, which describes his attempt to build a robot that simulates a baby orangutan. This project seems to be on hold now for lack of funding (lots of great stuff on his web site on this and other subjects – click the buttons for Projects and Backgrounders). I guess I’m a Steve Grand fan now (in company with Richard Dawkins among many others), and although I don’t plan to build a shrine and worship him, he’s definitely got my vote in the next god elections.
Posted by FlyingSinger at 10:13 AM

Richard Dawkins is quite amazing.
Brave too, I imagine he made a lot of mortal enemies among the crazies with his recent documentary.

I was so glad that someone had the courage to say that Religion was the root of all evil.