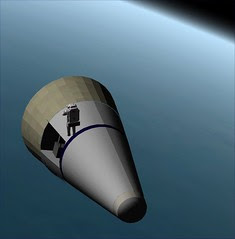 Mark Paton is continuing to develop the DH-1 add-on for Orbiter, and it's really cool. Based on the book The Rocket Company (discussed several times in this blog), Mark's third version can now simulate almost every aspect of the complex flight profile described in the book. He says that with enough fingers and attention to detail, you can launch the piloted DH-1 spacecraft to orbit and hover-land the piloted first stage back at KSC in the same session. You can later re-enter the orbital stage (if you were careful to save a little fuel) and land at KSC with the parasail. I've done most of the parts, but not all in one mission yet - working on it!

Mark still has a few things he wants to add, so expect a new release in a couple of weeks with some PDF documentation that I will be helping out with. I was the one who first got interested in a Rocket Company add-on for Orbiter (after author Patrick J. G. Stiennon saw my Space Review article on Orbiter and emailed me!), but lacking the skills to build it myself, I enlisted first Andy McSorley (prototype) and then Mark to help. Both have done amazing work.

The picture above is a little hack made by editing scenario files. Mark added a hatch to the orbital stage (a basic seat and joystick too), but it only opens in the landed configuration, so I had to trick it into opening in orbit. Then to show the scale, I added a couple of astronauts based on a new 3D mesh by "c3po" (one poor astronaut has drifted away in this shot). More pix on Flickr.
Posted by FlyingSinger at 2:46 PM