The Bund In Motion 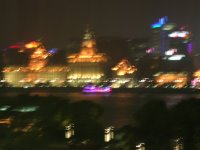 This was taken with a borrowed digital camera which I did not really know how to use. It shows Shanghai's famous Bund from my hotel window, across the Huangpu River. My friend uploaded and sent me the picture with the overly kind suggestion that it has "some artistic effect." Yeah, that's it, artistic, not just shaking the camera! Here's what it's really supposed to look like (not by me, just the first one I found on Flickr).

Flickr probably has all the photos I need of everything in the world, but I still think I should get myself one of those ultra-thin digital cameras so I can just keep it in my computer bag (I tend to leave the one we have at home unless it's specifically a vacation or something). I sometimes see some cool things on business trips, like the whole Shanghai skyline. Here is another Flickr user's shot of the Shanghai skyline including the giant Oriental Pearl TV Tower which is across the street from my hotel, the same one where the Flickr user stayed (he notes this in his caption, but the TV tower and hotel are on the left, not the right).
Posted by FlyingSinger at 10:26 AM