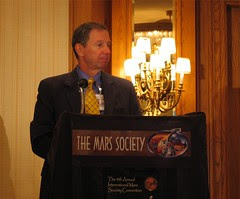 Day one of the Mars Society Conference was really great. It started with a so-so 20 minute speech (PDF) by NASA Administrator Mike Griffin (pictured) followed by 40 minutes of excellent and funny questions and answers on all sorts of NASA, space, and Mars issues. HobbySpace.com has a great summary report including the Q&A. Griffin said he was the "warmup act for Elon Musk," and he sort of was! Musk gave a great talk, showing many slides with diagrams of the in-work Falcon-9 launch vehicle and Dragon manned spacecraft (see HobbySpace again for good summary of Musk's talk).

NASA Associate Administrator for Legislative Affairs Brian Chase gave a talk on political and funding issues, a good warmup for the afternoon "Mars Blitz 2006" where about 100 Mars Society members visited the offices of various Senators and Representatives on Capitol Hill (meeting with staff members in almost all cases). Despite the 100 degree (F) heat and humidity and the fact that we only met with technology/science staff aids, it was an interesting and fun experience wandering the offices, halls, and tunnels of the Hill office buildings. Our Massachusetts group visited Senators Kerry, Kennedy, and Sununu (NH) as well as Rep. Michael Capuano. Although all claimed to strongly support NASA's Vision for Space Exploration which aims for the Moon and (eventually) Mars, we tried to press the case for more Mars focus and a faster schedule.

The evening started with a reception with some good food and OK wine, followed by a pint of Guinness and a screening of an excellent new documentary on the drive for Mars, "The Mars Underground," profiling efforts since 1978 to promote manned exploration of Mars. This film featured a lot of interviews with Mars Society President Robert Zubrin and some excellent computer-generated video of his Mars Direct mission plans. The DVD of this film was said to have distribution in most overseas markets (couldn't find it on Amazon UK) but not yet in the US - but this is expected by December. The soundtrack is really beautiful.
Posted by FlyingSinger at 11:50 PM