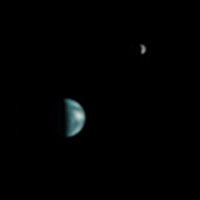 The "visible from space" bit in my last post reminded me of a question I'm looking into for a current project: What does Earth look like from the surface of Mars? The idea came up in one of the stories in Kim Stanley Robinson's The Martians, where he describes a bright blue "star" with a darker companion, the Moon, seen by one of the characters from the surface of Mars. I supposed that under best conditions (distance and Earth phase) that it would look a little brighter and bigger than Mars appears from Earth. Google says?

It turns out that Earth was imaged from Mars orbit on 8 May 2003 by the Mars Global Surveyor spacecraft (see above). According to this page, Earth had an apparent magnitude of -2.5 (the Moon was +0.9), and the image required processing for exposure and to apply color to the grayscale image. The distance was 139 million kilometers. For rough comparison, on 27 August 2003, Mars was in opposition and at its closest distance to Earth in over 56,000 years (about 56 million kilometers). It had visual magnitude -2.9 and an apparent diameter of 25 arc seconds. Earth is larger and more reflective than Mars, so if conditions were right, Earth would be distinctly blue and bright from the surface of Mars, though probably not visible as a disk without some optical assistance. I'm not sure the Moon would be visible at all with the unaided eye since it is small and quite dark (but maybe I'm wrong - at +0.9 it should be visible, the naked eye magnitude limit is +6). More research needed but now it's bedtime in Beijing.
Posted by FlyingSinger at 11:50 AM