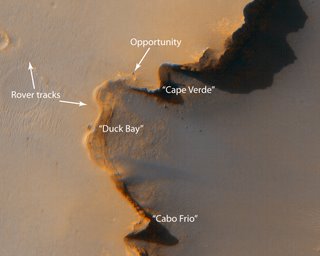 NASA held a video briefing today with key people from the MRO and MER (Mars Rover) teams to show off some amazing images and to discuss the synergy that is now possible with high-resolution orbital imagery from MRO and "ground truth" from the still active Mars Rovers (story here). The Rover Opportunity recently arrived at the 800 meter crater "Victoria" after a long journey. Three days ago, the MRO team used the HiRISE camera in its first "off-nadir" test - meaning they pointed the camera to one side of MRO's orbital path rather than looking directly below. The target was "Victoria" crater, and the detailed image showed Opportunity sitting on the edge of the huge crater! More pictures here.

The MER team also showed new images, including sections of a color panorama of Victoria crater that was NASA's Astronomy Picture of the Day on October 2.

In unrelated astronomy news, NASA also announced new findings from the Hubble Space Telescope, the discovery of sixteen new extrasolar planets detected in the vicinity of our galaxy's center. Centauri Dreams has a nice discussion of these findings.
Posted by FlyingSinger at 3:12 PM