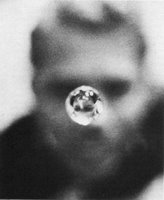 I'm just finishing an excellent book, Before Lift-Off: The Making of a Space Shuttle Crew by Henry S.F. Cooper, Jr. I file it under "space history" because it documents the crew training and the actual flight of the shuttle Challenger on STS 41-G which took place October 5-14, 1984, twenty-two years ago this week! Under the command of space veteran Robert Crippen, the crew of seven was the largest crew to fly to space up to that point, and the first to include two women, Sally Ride and Kathy Sullivan. They deployed a satellite, took radar images of the Earth's surface, and performed an EVA to test the feasibility of in-orbit refueling of satellites (with real hydrazine!). The photo shows a little optical connection - a picture of astronaut Dave Leestma's inverted image in a perfectly spherical zero-G water droplet, with Leestma himself out of focus in the background.

To write this book, Cooper was given regular but limited access to the crew through the many months of training for the flight, and more extensive access to the trainers who worked with the crew in hundreds of "sims" or simulations of various kinds. The shuttle was (and is) a complex vehicle, with hundreds of interacting systems and procedures to learn and practice. The many different types of simulators allowed the crew to learn how to operate each system and how to work together as a tightly integrated team. The trainers would generate a steady stream of simulated "malfs," "glitches," and "nits" to teach them how to recognize and recover from the many ways that the complex systems could fail.

The complexity and depth of this whole process is really impressive and requires tremendous dedication of everyone involved. When I "fly" a simulated space shuttle in Orbiter, as cool and realistic as it is in some respects, I know it's just the tiniest tip of the iceberg in terms of what's really involved in shuttle missions.
Posted by FlyingSinger at 11:34 PM