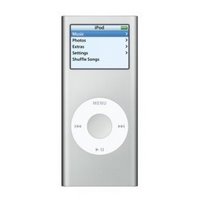 I finally got myself an Apple iPod - a tiny, silver, 4 gigabyte Nano, holding about 1000 songs. I've got about 9000 songs on my PC at home (mostly ripped from my own CD collection, though I have also bought quite a few songs from iTunes and eMusic), so filling up an iPod is pretty easy. I've loaded about 800 songs in just a couple of days. I could have put my whole music collection on one of the hard-drive (video) iPods, but I can get by with 1000 songs - it forces me to be a little selective and helps to assure that whatever pops up in shuffle play will be something I like.

Although I bought iPods for both of my daughters ages ago (to avoid charges of child abuse), I've resisted getting my own, a fairly rare case of "do I really need this?" With songs on both the computers I use and a small 512 MB (~125 songs) iRiver MP3 player for use in the car and on planes, I haven't been lacking for music. But the iPod's interface is just so slick, and shuffling from 800-1000 songs is nicely unpredictable (Led Zep, Julian Bream, Joni Mitchell, Papas Fritas, The Maggies, some Indian music, Bright Eyes, Mindy Smith, me, John Mayer, a song from the amazing show Wicked, Beatles, etc.).

I've even subscribed to a couple of free weekly podcasts from NPR (public radio), one a science show (Nova scienceNOW) and the other a weekly live classical music show from WGBH. I feel so modern.
Posted by FlyingSinger at 11:36 PM