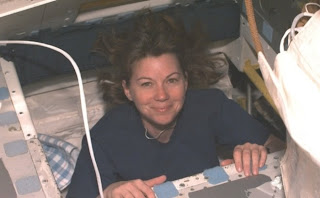 Space Expo 2009 was cool. Almost 1700 people came to the New England Air Museum on a rainy Sunday to participate in some space-related fun and education (and to walk around a great collection of classic airplanes and helicopters). I had planned to give one of the auditorium presentations, but my presentation was bumped when astronaut Catherine "Cady" Coleman (pictured here) told the organizers that she was willing to give her presentation three times. That was fine with me since it gave more visitors a chance to see and hear from someone who has actually flown twice in space (in 1995 and 1999) and is now training for a space station mission in 2010 or 2011.

Unfortunately I only got to hear about five minutes of one of Col. Coleman's talks during a very brief lunch break, because I was camped out under the wing of the B-29 giving a non-stop string of briefings to kids eager to try landing the space shuttle in Orbiter. About 70 people (mostly kids, some as young as 5) got to take the stick and try to land Atlantis from short final (my tables were a few feet from another simulator where you could try out the Wright Flyer using realistic controls while lying face down on a simulated wing - quite a contrast!).

I also had a second PC hooked up to a projector to show various Orbiter missions - Saturn V launches, Apollo 17 moon landings, shuttle launches, Cassini passes through Saturn's rings, etc. As usual, my visitors were amazed to learn that Orbiter is available as a free download. I had printed a bunch of handouts with Orbiter information and I also pushed my own tutorial book Go Play In Space (also a free download of course) as a way to deal with Orbiter's quite steep learning curve.

I was very happy when at the end of the day, Cady Coleman came over to our "hands on demo" hangar and I got to speak with her for a few minutes. I briefly showed her Orbiter and gave her one of my handouts, prompting her to say, "why didn't I know about this?" I also told her a little about the JPL Solar System Ambassador program. Preparing for a post-shuttle space station mission keeps her pretty busy (including trips to Russia and Japan), so I don't expect she will be downloading Orbiter, but maybe she will mention it to some of her educational contacts.
Posted by FlyingSinger at 12:00 PM

Hi, could you put some photos of your presentation?
Best regards:
Jacek

Unfortunately I was so busy with that big line of kids that I forgot to take any pictures this year. My exhibit was not very impressive except for Orbiter itself - just a couple of tables with PC's, a joystick, a projector, a screen, and a B-29 bomber. The bomber actually WAS pretty impressive. :)