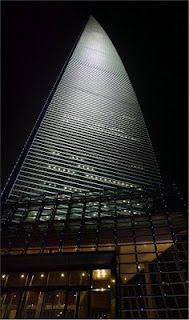 It's not what you think. It's just that I had dinner tonight with some Chinese colleagues on the 91st floor of the SFWC Building in Shanghai (that's Shanghai World Financial Center, which also houses the Park Hyatt Shanghai on floors 79 to 93 - I'm not staying there since I hear rooms start at $500). This building opened in August 2008 and at 492 meters and 101 floors, is currently the second tallest building in the world after Taipei 101 (I've been up that one too). From some angles the SFWC looks like a screwdriver or a bottle opener, but from where I was standing, it looked more like a sword with a curving blade. It's illuminated at night and is quite an amazing sight. The views from the restaurant of the tops of nearby buildings were also quite impressive, but the food, not so much, except for the prices.

The whole Shanghai skyline is a pretty dizzying sight. Welcome to the future (in some respects).
Posted by FlyingSinger at 11:02 AM