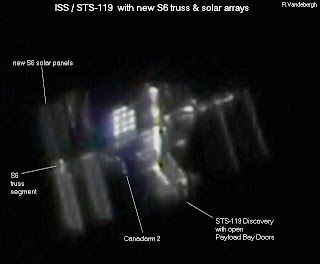 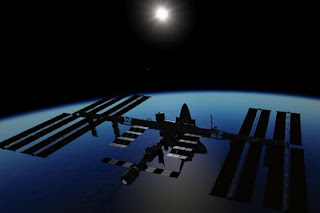 I haven't had time to follow the STS-119 mission or much of anything else in the news during this business trip, but I was happy to note that the power system of the ISS is complete and operational. All eight solar arrays are now deployed, with a combined total of 262,400 solar cells producing about 120 kilowatts of power.

The added solar panels also make the ISS a much brighter visual object in the night sky. Amateur astronomers have already photographed the expanded ISS with impressive detail as shown in the above photo by Netherlands astronomer Ralf Vandeburgh (courtesy of SpaceWeather.com).

When Discovery departs the ISS, they will do the usual fly-around and take pictures of the fully expanded football-field-size space station. Until then, one way to see what this will look like is to use Orbiter with the latest Shuttle Fleet and ISS Fleet add-ons and the STS-119 expansion pack available at Orbit Hangar. I haven't had time to keep up with all the updates, so the picture here is from the Orbit Hangar page for this add-on, courtesy of Dave Hopkins.
Posted by FlyingSinger at 10:39 PM

Thanks for the referral; whenever you post about my add-ons the downloads spike up! Thanks again...