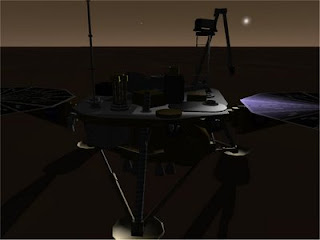 NASA's Mars Phoenix lander froze to death last November, but the data it returned from its polar landing site lives on and may lead to big changes in the way we think about Mars. This report in Science News previews two papers that will be presented next week at the annual Lunar and Planetary Science Conference in The Woodlands, Texas. The titles of the paper are pretty intriguing . "Physical and thermodynamical evidence for liquid water on mars?" (Renno et al) and "Perchlorate in Martian soil: Evidence and implications" (Hecht et al).

Wow. Liquid water on Mars? Now?!? Here's a quote from the article:

"There seems to be at least a possibility that we have liquid water in the near subsurface over much of the planet,” comments astrobiologist Christopher Chyba of Princeton University, not a member of the Phoenix teams. “That’s a pretty startling change in the way we think about Mars.”

Of course an ultra-salty perchlorate brine isn't exactly Perrier, but if there turns out to be widespread near-subsurface water, it certainly would change the way we think about Mars, and it could provide a valuable resource for future Mars exploration.
Posted by FlyingSinger at 2:41 AM