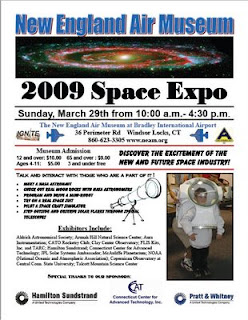 Space Expo 2009 will be held at the New England Air Museum at Bradley International Airport, Windsor Locks, Connecticut, on Sunday, March 29 from 10 am to 4:30 pm. A number of space-related exhibits are planned. There will be a special guest appearance and presentation by NASA astronaut Cady Coleman. Coleman was selected by NASA in 1992 and flew on space shuttle missions in 1995 and 1999. She is currently training for long duration flight on the International Space Station.

As I have done the last two years, I will have an exhibit table at Space Expo 2009 where I will demonstrate the Orbiter space flight simulator and give visitors a chance to try their hand in the final moments of an Apollo (moon) or shuttle (Earth) landing. I will also give an auditorium presentation on exploring space with your computer.
Posted by FlyingSinger at 6:02 PM