In Appreciation of Hubble 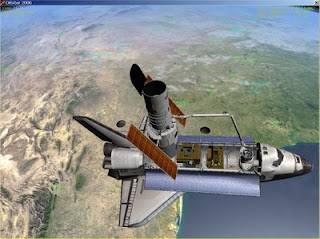 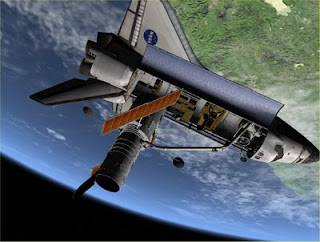 The Hubble Space Telescope is one the most amazing things humans have ever done with space flight. Of course everyone says things like this, and many things about space flight are amazing. But HST still blows my mind. Start with the plans for a bus-size telescope that would fill up the shuttle's payload bay, with incredible optics and instruments, and equally incredible pointing and stability systems. The instruments were planned from the start to be replaced as technology advanced. It would be an advanced robotic telescope that relied on human spaceflight to get to orbit in the first place, and that would be upgraded in the future by spacewalking astronauts.

Of course there was that unfortunate business with the wrong shaped primary mirror. I had nothing to do with that, but as an optical engineer, I was still embarrassed. HST made optical design and optical engineering temporarily famous (or infamous). But optical engineers (including some from my company), NASA, and the astronauts came through with the fixes, and HST went on to have a fabulous career as one of humanity's best windows on the universe. Additional upgrades gave rise to ever more amazing discoveries over the last 19 years.

Coming up soon will be the final Hubble service mission, STS-125 (planned for May 12 launch but it now might go a day early). It's a challenging mission including on-orbit "microsurgery" for some things that were never meant to be worked on up there, but if all goes as planned, we'll end up with the greatest Hubble ever.

As he most often does, Dave Hopkins is coming through with updates and scenarios for the Shuttle Fleet add-on to allow Orbiter users to simulate the mission, even before it happens (thanks Dave). He has released the first version of an STS-125 expansion pack on Orbit Hangar. Make sure you've downloaded and installed previous updates in the correct order before trying out the STS-125 (read the notes!). 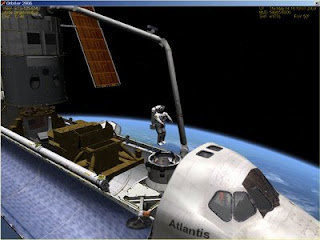 There are just a few scenarios so far - launch STS-125, then scenarios to practice final rendezvous, robotic arm grappling, and berthing the HST in Atlantis' cargo bay. A bit tricky! The included HST model gives you what you need, but doesn't look very realistic, so for my "photo session" I installed a different HST model by marg777. Then I did some scenario file text editing to replace the standard HST model in Dave's HST grapple scenario with "HST1" as shown in the screen shot above. I think it looks pretty good (there are a few things wrong with my pictures - any guesses?).

I'm looking forward to following STS-125 in mid-May and to the next generation of fabulous images and astronomical discoveries from HST after its final upgrades.
Posted by FlyingSinger at 9:43 PM

i hav seen a hell lot of pics sent by hubble.They r amazing.But really wanna know why r they planning to end its journey by making it fall into d bay?
also m happy bout d date 2 launch sts 125 coz datz ma birthday...12th may...

One thing I was thinking of that is "wrong" is that the HST solar panels, aperture door, and antennas are still extended and I believe they will retract those before securing it in the payload bay. The other things are that the HST is not secured to its mount, and the astronaut has no tether.

Once Hubble is no longer able to function, it will be a large piece of "space junk," albeit a very historic piece of space junk. Returning it to Earth would require a shuttle flight if it were even possible at all, and shuttle flights are ending next year. De-orbiting it in a controlled way so that it mostly burns up and the debris lands in uninhabited ocean areas is probably the safest thing to do.