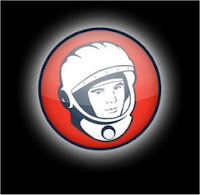 Yuri's Night is April 12. It's a celebration of humanity's achievements in space, with parties planned around the world from April 4 through 12. I'll be in Europe most of that time so I'll try to catch a party in Munich or Amsterdam (probably no time). I'll actually be back on the eleventh (probably too tired).

The goal of Yuri's Night is to increase public interest in space exploration and to inspire a new generation of explorers. There's a cool theme song for Yuri's night this year, "Fueling Dreams that We Are Not Alone" by singer/songwriter Jay Garrigan, performed by his band Poprocket. I don't know how to embed an MP3 player in my blog, but you can play or download the MP3 here, and read about it on Jay's blog.
Posted by FlyingSinger at 9:32 PM