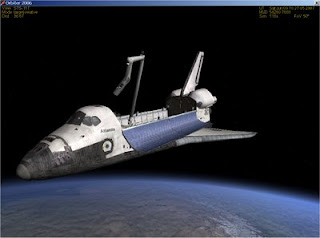 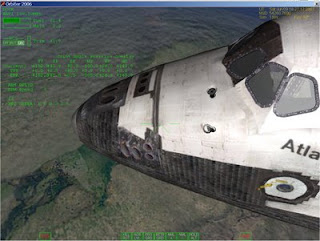 After meeting astronaut Cady Coleman last weekend at Space Expo 2009, I looked up some information on her background (I wished I had done that before I met her, but things have been busy). One interesting fact I learned was that she has been chief of robotic arm operations and training for all shuttle and ISS missions. This prompted me to do a little SRMS (Shuttle Remote Manipulator System) experimentation myself using the Shuttle Fleet add-on in Orbiter.

When I do Orbiter demos, I will often deploy the SRMS manually just to show that it works in the sim. This time I actually reviewed the Shuttle Fleet PDF manual and especially the SRMS Checkout Tutorial that Dave Hopkins has thoughtfully provided with the Fleet documentation. Although I don't know how accurately the SRMS model in the Shuttle Fleet reflects the detailed operations of the real thing, it certainly has the same degrees of freedom (joints that can be set to specific angles and moved in specific sequences), so I think it does give a pretty good idea of the challenges of operating the system with precision. And you can actually grab and deploy things with it.

I didn't have too much time, but I managed to get the hang of it and take some pictures of the first deployed inspection position, looking with the end effector camera at the port side of Atlantis's nose (screen shots above). I followed the tutorial to go to the initial operating position, saved that sequence for later recall, entered and applied the angles and moves for the inspection position, stored that sequence, then used the stored sequences to do the whole thing again (much quicker). The Orbiter version of the SRMS has multiple speeds in case you get impatient operating in real time (the real arm moves quite slowly for obvious reasons).

This is something I didn't know much about, and it's really pretty cool. Note that this is just one of many features in the Shuttle Fleet add-on, which in turn is only one of hundreds of available add-ons for Orbiter (though certainly one of the very best). My next test: grabbing the Hubble from orbit like the STS-125 astronauts will do next month. That's a challenge for rendezvous as well as SRMS operations.

Update: In terms of how accurately the Shuttle Fleet SRMS model reflects operations of the real thing, one interesting point is that you can use tables (see below) from actual NASA Flight Data File procedures ("PDRS OPS C/L") to determine the inputs in Orbiter, so at a system level, the fidelity is quite good, though of course the "user interface" in the actual shuttle is not duplicated. Instead you are entering keyboard commands and/or filling in dialog boxes.

Posted by FlyingSinger at 6:48 PM