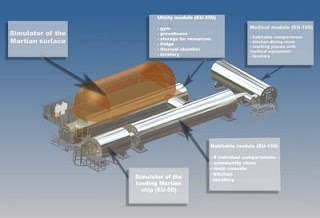 While I was in the UK last week, I picked up a copy of BBC FOCUS, which is a great monthly science/technology magazine. The main cover story was on bioterrorism, but I was most interested in "Astro Big Brother" which described an interesting joint Russian/European project, a simulated 520-day human Mars mission.

The Mars 500 mission will be totally Earth-bound at a facility in Moscow, where 6 volunteers (4 Russian, 2 European) will stay for over 500 days in a small, multi-room isolation chamber meant to simulate a Mars- bound spacecraft. Although it will be at one-gee and will not have a self-contained life-support system, the crew will otherwise be physically isolated. They will have a stored food supply to last the duration of the mission (and also the ability to grow some of their own food). They will have communication with mission control, although communication time delays will be simulated based on their calculated distance from Earth. There will also be a Mars surface operations phase during which part of the crew will enter a smaller "landing vehicle" and spend time on a simulated Mars surface. 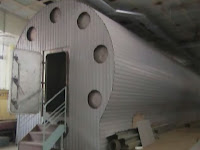 What's the point? Psychological and other "human factors," pretty much. The crew will have assignments for scientific experiments, system maintenence, etc., but they will mainly have a lot of time with a small group of people in a confined space (the interior looks something like a very low tech house trailer). Of course crews have spent time in confined and isolated spaces before (submarines, Antarctic bases), but probably not for anything like 520 days (17 months, almost a year and a half).

I don't think I'd want to do that unless I was really going somewhere cool. But it makes sense to check this out, even though we're still quite a few years from actually stuffing people into a Mars-bound spacecraft (and some Mars mission profiles are more like two years end to end).

The full mission is supposed to start in October 2009. The main site for the project is here (Russia based, but in English). It doesn't have too many bells and whistles (the ESA pages are better). The BBC FOCUS article is not online, but might be next month when the new issue comes out.

UPDATE: Thanks to a tip from Suzy McHale, I can point to a better set of photographs at the Russian-only "Marc-500" site. I found I could still read enough Russian to find the photograph section and figure out some of the captions. There is currently a 105-day test mission underway with a six-man crew (4 Russians, 2 Europeans). The photo below is from one of the gallery sections with photos from April 12, Yuri's Day, a big day in Russian (and Earth) space history. 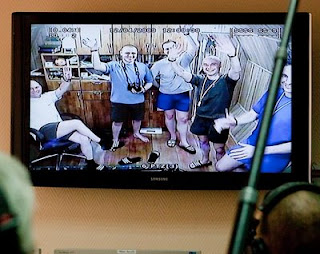 Posted by FlyingSinger at 8:13 PM

There's a better/updated website at IMBP (though only in Russian): Project Mars-500