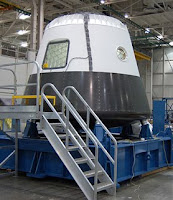 There's a good article on SpaceX in the current Popular Mechanics, available online here. Written by Michael Belfiore, the article briefly covers the history and some future plans for Elon Musk's private space venture. It includes a "pencast" by SpaceX's propulsion chief, Tom Mueller. This is a narrated motion-capture "whiteboard" video in which Mueller sketches a diagram of his Merlin engine design and explains how it works. There's also a cool photo of a Dragon spacecraft in assembly (better than the November 2008 SpaceX photo shown here).

SpaceX has a contract from NASA to demonstrate cargo delivery to the ISS with the unmanned version of Dragon by the end of 2010. This will be launched on their Falcon 9 rocket for which they also have a number of commercial launches booked. NASA's future in human space flight is really up in the air right now. SpaceX embodies founder Elon Musk's passion for helping to get humans beyond the Earth (his first thought was Mars until he realized how expensive it was to launch things into space and decided to work that problem first). I'm hoping SpaceX and other private space companies will take up the slack through space tourism, launching research projects and astronauts for other countries, and whatever else it takes to keep things moving on the road to a spacefaring society.

PM has a number of other articles on the next 50 years in space online too.
Posted by FlyingSinger at 2:49 PM