The Skinny On Solar System Sizes

Somehow I found myself on Mike Brown's blog (I was actually looking at where some of my many Carnival of Space visitors were coming from, and one thing linked to another). Brown is the Caltech planetary astronomer who has helped discover and name several TNO's (trans-Neptunian objects) in recent years. He wrote a post inspired by a "planetary place mat" that his young daughter has, with planetary art work that gives misleading information about the relative sizes of the planets (and still shows Pluto as a planet, a rather hefty one that no one with a heart could even think about demoting from full planethood - though Pluto is actually the 18th largest known object in the solar system). He gave several examples of how the graphic might be improved, ending up with this one, which is pretty good - it shows every solar system object that orbits the sun and that can be drawn as at least a pixel at that scale (overlapping the objects and only showing part of Jupiter and Saturn really helps and makes a really attractive graphic too).

Then I was reading the comments, and somebody pointed to this 2007 post, which features a huge Photoshop graphic by Alan Taylor showing all the (then) known solar system objects 200 miles (320 km) or more in diameter (this includes moons, not only objects orbiting the sun). This graphic is really cool, though a little unwieldy (11060 x 1000 pixels, 1 MB JPG).  You have to download it and scroll it horizontally in a graphics program to appreciate the detail. He later did a metric-only version (JPG) and an unlabeled version (JPG). Note that the dwarf planet 2005 FY9 is now called Makemake. 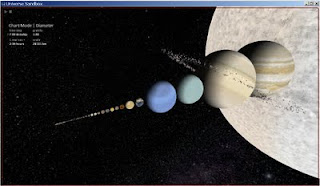 UPDATE: Dan Dixon pointed out that his Universe Sandbox program has a feature called "Chart Mode" that makes it easy to compare the sizes, masses, and other features of all the bodies in a simulation. It's not too apparent in the current version - right click on the graphics pane to bring up the controls and click the Chart Mode button. Very cool - you can zoom and pan and really get an idea of how things compare.
Posted by FlyingSinger at 6:55 PM