I just discovered a new way to play in space - Universe Sandbox. This "interactive space simulator" is essentially a multibody gravitational simulation program (real physics!) with excellent 3D graphics, extensive controls, a friendly user interface, and a good number of sample systems. It also has a simple tutorial system that is completely integrated with the application. This is used for the "basic training" and also for a set of brief activities called "fun things to do." These include many of your favorites like destroying Saturn's rings, blowing up the Death Star, and turning Jupiter into star. Yes, you can blow things up, change the properties of objects, introduce new objects, and change paths to crash things into each other. Go ahead, become a planetary mad scientist and see what havoc you can wreak using only gravity. You can always reset to the original scenario if you mess things up too badly. 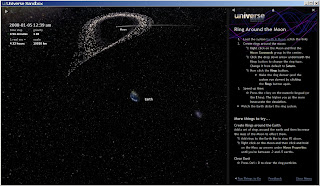 This program is similar in some respects to Gravity Simulator, but with 3D graphics (including an optional red/green anaglyph setting for use with 3D glasses), more interactive and intuitive controls, and a generally more playful approach. The physics is there and I'm sure you can learn a lot about gravitational motion by playing with all the parameters you can change for the various objects in the scenarios. You aren't restricted to the planets and moons of the solar system - you can work with stars and galaxies too.

The real beauty of the interface is that it's very easy to control the focus and scale of what you see using just the mouse and mouse wheel. Time is greatly accelerated as is necessary to see something interesting with objects that might take weeks or centuries of real time to move visibly at the scale of a computer screen. You can speed up, slow down, or stop time, and there's an automatic time setting which tends to always show things moving at a sensible rate in simulation time (a second of real time might represent minutes, months, or 50,000 years or more if you're looking at, say, the local group of galaxies).

This program is quite different from Orbiter with its first-person spacecraft-oriented approach to exploring the solar system. Universe Sandbox is much more about the big picture - and it's also sort of a cosmic-scale "third-person shooter," though the "violence" is very stylized. It's great that you can do interesting gravitational experiments in a few minutes, yet there is also a lot of depth. I will probably be writing more about this program as I learn more and use it for educational outreach demos. Universe Sandbox offers a time-limited trial and a "pay what you like" policy for the full version.
Posted by FlyingSinger at 11:09 PM


The real beauty of the interface is that it's very easy to control the focus and scale of what you see using just the mouse and mouse wheel.
meizu mx5 review
meizu m2 review
meizu mx5 price