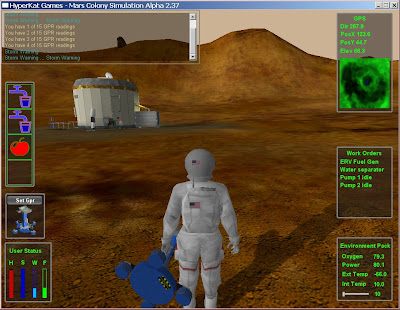 Mars needs some work as a fun destination. Speaking in virtual terms, I've orbited and landed on Mars countless times in Orbiter, but once you land somewhere in Orbiter, there really isn't much to do (this is not always true - if you use the AMSO add-on to simulate Apollo Moon missions in Orbiter, you can do EVA's, drive the rover, and collect samples). That's OK - Orbiter is all about launches, orbits, and landings.

But what about living on and exploring Mars? I downloaded a free early alpha version of Mars Colony Simulator from HyperKat Games and spent a couple of hours playing with it on my own (there's a new multiplayer aspect that I didn't try). It seems to be directly inspired by Mars Direct, with a two-story tuna can COHAB and a nearby ERV (Earth Return Vehicle). It's got a 3D first-person interface that's fairly intuitive, and you start out in a space suit on the second floor of the COHAB, with several mission 1 objectives to complete.

You have to worry about things like making sure the water separator is running. Of course it's not (because it needs water), and you need to first find water you can drill for, which means you have to walk around outside and take a bunch of GPR (Ground Penetrating Radar) readings to find the water. So you go outside and start to do this for a few minutes, but watch out, dust storm warning! Get back inside, get out of your suit and top off the power and oxygen while waiting for the storm to pass. Suit up again and go out, but first you need to clean the dust off the solar panels (both units). Take a few GPR readings until, what's this? Another dust storm? It's accelerated time, but jeeze.

A real Mars crew would be 3 or more people, so I guess multiplayer is the way to go here, but I'm not ready for that. The simulation has food, water, and a bathroom, and you have to watch out for your player's health, sort of like the Sims (I guess). There's also agriculture (I only saw the algae tanks, but there's a greenhouse in mission 2, once you accomplish mission 1 and have a water supply - mission 2 also has a rover). There is some limited documentation. It looks like it will eventually be a cool and educational sim, but it's a bit too alpha for me right now. I'm not sure I'm cut out to be a virtual or real Mars colonist at this point in my life, but I'll keep an eye on this sim as development continues.
Posted by FlyingSinger at 9:22 PM