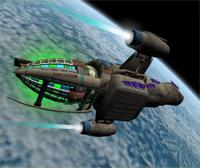 I have an Australian friend (Peter "MiGMan" Inglis) who shares my love of making music and playing with things that fly (I know what you're thinking - who are these guys, FlyingSinger, DarthVader, MiGMan?!? - blame it on too many childhood comic books). He strongly recommended the film Serenity, so Friday night my wife and I went to a 9:30 show. It's a quirky movie, more "space western" than SF, but we were really getting into it for 45 minutes until the film broke. We got our money back, but that's very frustrating. Have to find time to see the whole thing before it leaves the theater.

Intrigued by the film's oddball space freighter "Serenity,", I checked the Orbiter Forum and found that there's already an add-on model for Orbiter! Jon Marcure created this animated gem from the short-lived "Firefly" TV series that the film is based upon. Orbiter has realistic orbital mechanics and can re-create real spacecraft and missions, but there are tons of fun fictional spacecraft for it as well. The screen-shot shows the Serenity firing all engines in low Earth orbit.
Posted by FlyingSinger at 10:33 AM