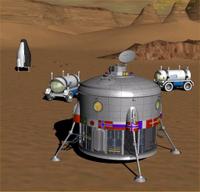 Mars Direct is a proposal and an architecture for getting to Mars sooner rather than later, one key component of which is the idea of "living off the land," which really means making use of available resources on Mars for certain parts of the mission. You can send the unmanned, automated Earth return vehicle (ERV) there ahead of the crew and have robotic systems deployed which will make rocket fuel mostly from atmospheric gases. This will save a lot of mass for the total mission, allowing it to be done without complex Earth-orbit assembly as in many earlier Mars mission proposals. There's more to it than that, and Dr. Robert Zubrin's original book The Case for Mars is still the best basic source on Mars Direct.

The Mars Direct Project for Orbiter (MDPO) is an ambitious team project which intends to model a Mars Direct mission from start to finish in Orbiter. Some parts of this add-on are already modeled in near-final detail, such as the "HAB" (habitation module which will carry the crew from low Earth orbit to the surface of Mars and provide the primary living space) and the Ares booster and upper stage. Other parts are in less complete form, including the essential Earth Return Vehicle (ERV).

To give an idea of what this could look like, I've put together a "teaser" picture with elements from several sources. The HAB is a MDPO beta version beautifully modeled by Ken Bolli. The terrain is a recent 3D surface base for the rugged Vallis Dao region of Mars, by "jtiberius." The "Mars Rovers" are actually Moon rovers created by Andy McSorley for his Prometheus Project. And in the background, the ERV from an earlier Mars Direct add-on for Orbiter, published by Zachary Grillo. I mashed these together for my "photo shoot" - they're not distributed in this form, but I wanted to give an idea of what a Mars Direct base scene could look like in Orbiter. I've flown most of the phases of a Mars Direct mission, but I'm looking forward to eventually simulating the whole thing, except for the six-month trip (fortunately Orbiter supports high levels of time acceleration!).
Posted by FlyingSinger at 9:53 PM

MDPO sounds like a great project .. but what about using the newly announced Exploration System?

Well, Mars Direct is a specific approach that was defined by Dr. Zubrin in the early 90's, not by NASA. MDPO started before NASA's new vision for space and Exploration System, and a lot of people still believe the MD approach can be done better and faster than the NASA approach (NASA actually incorporated many of Zubrin's ideas in its late 90's Mars proposals). Maybe Mars Direct will even be done by a private company or group, or by another country (the SF book "The Martian Race" by Greg Benford has a race to Mars fired by a big private prize, and one team basically uses Mars Direct).

Of course other Orbiter folks are building CEV's and new boosters and I'm sure the whole Exploration System will be done. But MD is a defined thing that some of us really want to see simulated.