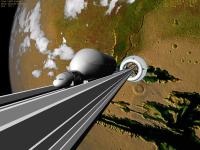 I'm just finishing Red Mars by Kim Stanley Robinson, a really amazing SF book about the first steps of colonizing and terraforming Mars, starting around 2026. It could happen, and I think it should. I think space is going to be very important in the next 20-100 years, and colonizing Mars will be part of that. A backup plan for humanity, among other things. Along these lines, I wrote a long article called "Your Future in Space" which was adapted from the Epilogue of my Orbiter book Go Play in Space. The article is posted at SpaceNow.ca, a new and very cool space advocacy and education site.

I'm going to press my luck and include both a web link AND a picture in this post (I've had some trouble getting this blog going). The picture is from Orbiter and shows a space elevator rising from the equator of a future terraformed "green Mars." Yes , space elevators will be possible, thanks to carbon nanotubes (they can be simulated now in Orbiter), and yes, terraforming Mars is probably possible, but it will take a long time. "Green Mars" is the next book in Robinson's trilogy, probably to be read on my next long airplane flight somewhere.
Posted by FlyingSinger at 2:28 PM

Very arresting image. If you have more ... we are (among many other things) putting up a gallery of 'space elevator' art from enthusiasts.

Email info at liftport dot com for details, see our gallery at www.liftport.com