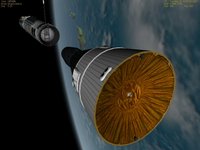 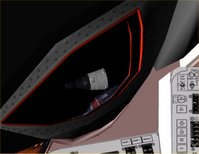 The Project Gemini add-on for Orbiter is just beautiful. Although most of the changes in the latest (4.5) version are internal (it now has a virtual cockpit), I had never tried the earlier versions. Rob Conley and his "Meadville Space Center" partners have done a great job on this. Project Gemini was where the vital techniques of rendezvous and docking were actually demonstrated - the ability to do this maneuver with precision would be a key requirement for the planned two-spacecraft (Command Module and Lunar Module) Apollo Moon missions.

The first Orbiter screen shot depicts Gemini about to dock with the Agena booster above Hawaii. The second shot simulates the dual-spacecraft rendezvous missions flown in 1965 with a view of Gemini 6 from the commander's window of Gemini 7. These Orbiter views really bring back memories of those mid-sixties missions, and especially of the color photos in LIFE Magazine. Now I finally get to fly the Gemini.
Posted by FlyingSinger at 10:33 PM