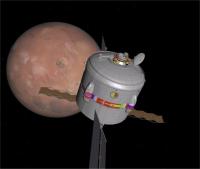 I've got a personal web site that I hardly use, several guitars I hardly play, a pilot's license I hardly fly with, not to mention that tread mill in the basement. I've got a CD I'm hardly promoting (from late 2003 - I still like the songs though, and I've got a bunch more at least half-written for whenever the next CD project happens, maybe in 2006). So do I really need a blog?

Maybe I do. Things change. I have a personal journal that I mostly use on business trips, and I kept journals in my college years and in my heavy flight sim period, and in my flight lesson days. This won't be a personal journal - just a place to share some thoughts on whatever happens to be the obsession of the month. Maybe I mostly share these thoughts with myself (have we reached the point of one blog for every person on the planet yet?)

The last few months the obsession has been space flight, courtesy of a wonderful freeware space flight simulator called Orbiter. Big time obsession. I even wrote a book about it, an introduction to space flight called Go Play In Space. That's 136 pages and 8 MB of obsession. That's a small picture from Orbiter, the Mars Direct HAB (habitation module) approaching Mars. I'll probably write more about Orbiter and Mars in days to come.

This blog will NOT be about politics (OK, I think Bush sucks, but I don't want to discuss it), families, travel (well maybe sometimes), TV, or dogs.

I guess blog entries are often brief, and I'm often not, though I aspire to be. To be continued I guess.

Posted by FlyingSinger at 9:26 PM