Fly me to the Moon, too! 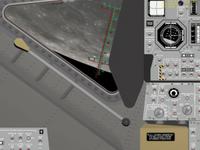 I really like DarthVader's Orbiter-inspired blog Fly Me to the Moon - he is learning Orbiter and Apollo at the same time, starting with Earth orbit testing of the CSM in Apollo VII, just like real life. Makes a lot of sense. I've only flown selected segments of Apollo XI myself, but intend to fly a complete Apollo mission one of these days. I know Orbiter pretty well, but the accurate NASSP/Apollo add-on has its own learning curve. See all those switches on the Lunar Module (LM) panel?

I'm also trying to watch From the Earth to the Moon, the Tom Hanks/HBO mini-series I recently bought on DVD. It's really great, but with all the other things going on, I've only watched 3 episodes so far. One was about Apollo IX which was the first mission to test the LM. Although it was "only" an Earth orbit mission, it was complex and difficult, and the episode also showed a lot of the complex engineering work that Grumman had to pull off to to get "Spider" to fly at all. Great stuff.
Posted by FlyingSinger at 2:28 PM

I finished watching "From the earth to the moon" last saturday evening and it's pretty pretty good. I really like the fact that each of the episode focus on some "background details" related to the Apollo mission.

Tom Hanks is my master now ;-)