China and the Moon 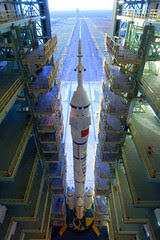 I’ve read a number of articles in recent days about how the space race in Asia is heating up. Japan will launch its Moon-orbiting SELENE probe in August. India has an active space program. South Korea is building a rocket launch site. And China’s program is the most extensive of all in Asia, including human spaceflight (two orbital missions so far, with the next one planned for 2008). China seems to view its space program as a serious matter of national power, prestige, and technological leadership.

According to this report from a recent visitor to China (thanks to Brian Dunbar for the tip), China is very serious indeed about the Moon – according to SciGuy's guest blogger, they plan to get Chinese astronauts there within 10 years, and to “not make the mistake” that the U.S. did, i.e., they will establish a permanent Moon base. If that should actually come to pass, it will certainly be well ahead of NASA's plans for the Moon, and while the immediate economic value of a Moon base may be questioned, its message of technological and territorial leadership would certainly be clear.

The picture of the Chinese LM-2F "Long March" booster above is from the Flickr pages of Kodiakspace, a fellow Orbiter user who has collected a number of photos and other images from Chinese space missions and plans, in addition to images of his Orbiter add-ons and adventures.

Posted by FlyingSinger at 1:59 PM