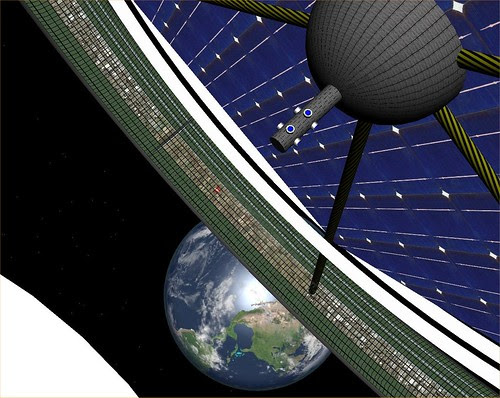 Although it ended in March, I just discovered the Space Settlement Calendar Art Contest that was sponsored by NSS. The picture above is NOT one of the entries - it's a screen shot of an orbital space settlement modeled in Orbiter, the Stanford Torus (several other pictures on Flickr). While Orbiter can make some pretty nice images (considering that it's a real-time space flight simulator generating many frames per second), artists can produce spectacular images, and many of the entries in this contest are indeed spectacular, especially the grand prize winner, Return to Abalakin by Alexander Pruess. His image is a realistic, highly detailed, and beautiful internal view of a Stanford-like space settlement.

I would have loved to show the image itself, but it's copyrighted and all, so I better not - hence the Orbiter image as a placeholder for the space settlement idea. Check out the gallery. I'm looking forward to hearing more about the contest and buying one of the calendars next month at ISDC in Dallas. I learned about this through Jim Plaxco's Artsnova blog. Jim is active in NSS and headed the contest committee. He is also a JPL Solar System Ambassador in the Chicago area.
Posted by FlyingSinger at 4:56 PM