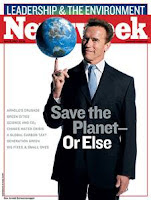 It's a beautiful spring day here in New England, but the signs of climate change are popping up all over the place. I'm in the middle of Robinson's Fifty Degrees Below and I am really enjoying the mix of interesting characters and real science (though admittedly not much in the action department). Climate is changing faster in this very-near-future novel than in real life, though not implausibly faster. A key idea is that of tipping points - when you reach one, things can change really fast (sort of like the chaotic orbits in Fly Me to the Moon).

Some recurring characters in the book are from the fictional island nation of Khembalung, where Tibetan refugees have established a home on a river delta island in the Bay of Bengal. Barely at sea level to begin with, rapid climate change results in the complete flooding of the island, making refugees once again of the 12,000 Tibetans who had lived there. Khembalung is fictional, but there are real islands there, and they are sinking, as discussed in this article in today's New York Times.

This week's Newsweek has a number of articles on the issues of climate change and leadership, which is clearly not coming from Washington, but fortunately is coming from California and other places. I forget which Terminator movie it's from, but one of Arnold's signature lines is "come with me if you want to live." Sounds like the start of a plan anyway!
Posted by FlyingSinger at 11:41 AM