Visual Discussion: Space for All 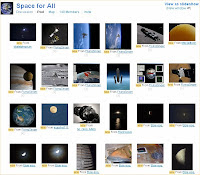 I've been using Flickr for quite a while as a place to store and display my gallery of Orbiter screen shots (and a few actual photos) for blogging. Flickr is also one of those Web 2.0 net-social things you hear about, though I haven't paid much attention to that aspect. Then yesterday I noticed a comment on one of my pictures inviting me to submit it to the Flickr group Space for All, so I joined the group and submitted a few shots to the pool. There are many astronomical photos, NASA images, photos from museums, and even a few other simulation images from Orbiter and Celestia. Some really excellent stuff - it's a nice way to view the "best of" images created or selected by a number of people with space and astronomy interests.

I also joined the Computer Simulations group and submitted a few Orbiter shots. It's a more eclectic (and currently smaller) group with flight simulator pix, 3D modeling examples, and a few from Celestia as well.
Posted by FlyingSinger at 3:47 PM